As basketball evolves into a three point shooting contest, there is still a need for quality big men who can protect the rim and rebound on the defensive end. UNC has shown the last couple years that there is still value in having good quality depth in the front court, and playing a double post type offense.

Today I want to take a look at some of the lesser known guys that are going to help shape the league for this year and beyond.

Huff is one of my favorite up and comers in the conference. He is coming off of a redshirt year in which he gained around 40lbs, and he grew another couple inches to get over the 7′ mark. He is a legit stretch five who can also protect the rim. It may take him some time to get acclimated to both the level of play, and lugging around some more weight, but once he finds his groove he will be a force to deal with. I may be a year early on this prediction, but I am willing to take that chance.

Elijah Thomas seemingly got lost in the shuffle after leaving Texas A&M 8 games into the 2015-16 season and transferring to Clemson. A former top 30 recruit, Thomas played 24 games after becoming eligible in December last season averaging 7.5 points and 4.2 rebounds while collecting over a block per contest. He grabbed an impressive 22.4% of available defensive rebounds while on the floor. DPOY Ben Lammers grabbed 18.9% last season to give a baseline. If Thomas can stay out of foul trouble (1 foul per 4.8 minutes played), and increase his minutes, he will anchor the Tigers defense and be a dark horse contender for a DPOY award at some point over the next 3 seasons. 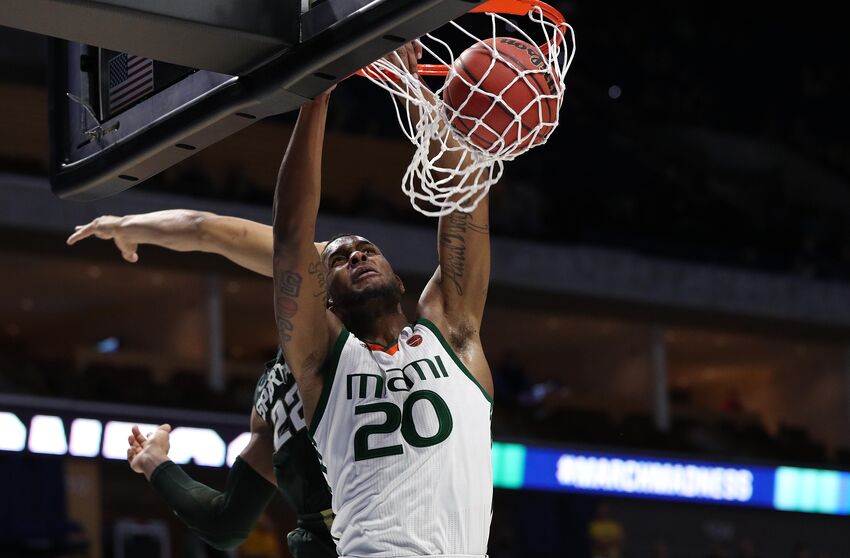 Huell is a popular pick to take a big leap this year and rightfully so. The 6’11 Miami native is an athletic freak who should be the primary front court presence for the Hurricanes this season. He will need to improve his rebounding (8.5 TRB%), but that should come after a year at Miami under Chris Caputo. Huell saw his minutes fade a bit towards the end of last season which is a concern, but he is the most talented big on the roster and will play as long as he remains focused.

Doral Moore may be the most naturally gifted guy on this list. For his career, he snags 17.6% of total rebounds available while on the court and blocks an impressive 10.8% of 2pt fga. Consistency and foul trouble have plagued the seven footer in his first two years, averaging a foul for every 4.5 minutes played. He showed out in a two game opportunity his freshman year when Devin Thomas was injured, but has done little since. Now as a junior he will be looked upon to provide a consistent inside presence for the Demon Deacons on both ends of the floor. He has the talent, he just needs to put it all together.

The 7 footer from Egypt is a fun player to watch during the course of the game. He is one of the better rim protectors in the league who has increased his blocks per game each year from 0.7 his freshman year to 2.1 last year as a junior. His 2pt fg% also increased last year from 47% to 63%, and his effective field goal percentage finished at a fantastic 59%. Last season he also grabbed an impressive 16.7% of available defensive rebounds. Ray Spaulding and VJ King may be more popular breakout candidates, but Mahmoud should average around 9 points, 7 rips and 3 blocks for interim head coach David Padgett. With Malik Williams coming in, Anas may not see an increase in minutes, but should still get around 20 per game.

Martinas Geben-Notre Dame-After a successful summer playing for the Lithuanian national students team, Geben should give Mike Brey some quality minutes this year when Bonzie needs a blow.

Nik Popovic-Boston College-Should make a big leap after averaging 6.1 points and 3.5 rpg as a freshman.

Sylvester Ogbonda-GT-Word out of Atlanta is that Vess has been almost dominant in practice this offseason.

Omer Yurtseven-NC State-After what can only be described as a disappointing freshman campaign, Yurtseven may flourish under Kevin Keatts and a new system. He has the talent to be a force in the league, he just needs to play in a structured offense. Keatts offense wasn’t all that big man friendly at UNCW, but he may make Omer a featured piece.